Remembering Jesse Orosco at his most dominant

When we talk about the best pitching stretches in Mets history, the discussion usually starts with something from Dwight Gooden circa 1985 or Tom Seaver from any number of seasons or a Jacob deGrom stretch from 2018 or 2019.

One oft forgotten is Jesse Orosco and his run of dominance in 1983.

The 26-year-old Orosco went 13-7 with a 1.47 ERA and 17 saves in 62 relief appearances spanning 110 innings. This was a time when it wasn’t unusual for a good relief pitcher to be asked to pitch two to three innings in a game, which Orosco did 33 times.

That was all good enough to place Orosco third in the NL Cy Young voting behind John Denny and Mario Soto. He also won NL Pitcher of the Month for August.

Orosco’s most dominant run that season is one I’d like to relive here. On July 19, he allowed six runs in one inning in relief of Seaver in an 11-7 loss to the Braves. The Daily News called it the most humiliating Mets loss of the season as Seaver failed to hold a 6-1 lead.

That appearance was out of character for Orosco. It broke a streak of 11 scoreless innings from his previous five appearances. Undaunted, he’d start a run that was much more impressive.

In Orosco’s next 15 appearances, he went 7-0 with 5 saves in six opportunities. He was charged with no runs, though three inherited runners scored. In 26 1/3 innings, he allowed 16 hits, though his strikeout-to-walk ratio was a rather unimpressive 17-14. The scoreless streak ended at 27 2/3 innings when he allowed a run to the Giants on August 27.

The coolest thing in the run was that Orosco won both games of a doubleheader against the Pirates on July 31. He pitched four scoreless innings in the opener, which the Mets won in the 12th inning when Bob Bailor’s hit scored rookie outfielder Darryl Strawberry.

Game 2 went 12 innings as well with veteran Mike Torrez pitching the first 11 scoreless frames. The Mets were actually no-hit until Hubie Brooks singled off Jose DeLeon with one hit in the ninth inning. They’d score the winner after Orosco pitched a scoreless 12th, when Mookie Wilson raced home from second base when George Foster hit a ground ball to second on which the Pirates could only get a force out.

There were other thrilling appearances in this run. On August 7, the Mets beat Lee Smith and the Cubs 6-4 in 10 innings. Orosco closed it by loading the bases with nobody out in the bottom of the 10th, then struck out Keith Moreland and Mel Hall, and got Ryne Sandberg to ground out to end the game. He then pitched three innings of scoreless relief the next day against the Expos in a 10-inning win.

On August 19, Orosco struck out five Giants in two innings as the Mets game back with two runs in the ninth and one in the the 10th to net Orosco his 11th win. The biggest out of the game was Orosco striking out Jeffrey Leonard with the bases loaded and two outs in the ninth inning to send the game to extra innings.

Note: The 1983 Mets were terrible, but they sure played a lot of very exciting games.

Orosco’s scoreless streak ended when he allowed a run in a 3 1/3-inning save against the Giants on August 27. Leonard got him for a home run that merely cut a three-run lead to two.

The next day, Daily News baseball writer Jack Lang penned a comprehensive Orosco feature for the Sunday edition. It spoke of Orosco’s devastating slider (which would be even more valuable three years later). And it told of how Orosco made a promise at his father’s funeral the year before, one he would live up to for the next several seasons.

“I’ll be better for you now,” he said. “I’ll get stronger now. Even if you are not here to see it, I will be the best for you.”

My favorite stats: Orosco finished with a 1.47 ERA in 110 innings in 1983. No one has had a better ERA pitching at least that many innings in a season since then.

Orosco pitched on no days rest (or the second game of a doubleheader after pitching the first) 16 times that season. He allowed 3 runs in 26 innings.

Orosco had 5 wins and an 0.40 ERA in August. He’s the only Mets reliever to record five wins in a calendar month. 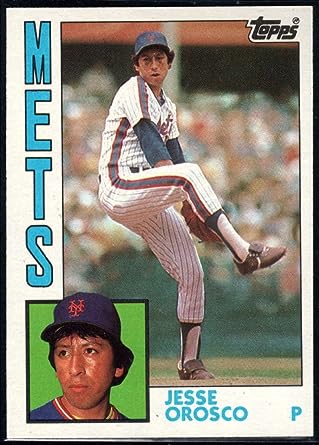