Ya Gotta Believe In The Best Stretch By a Mets Reliever

Remember watching Edwin Díaz mess up game after game last season and saying to yourself “This will be the one in which he turns everything around” only for that never to happen.

This is the story of the time that it did. If I’m going to write about great relief stints in Mets history then it is imperative that I make sure you know the tale of Tug McGraw circa 1973.

I’m guessing if you’re reading this, you’re familiar with the story of “Ya Gotta Believe!” and how McGraw’s rallying cry became the spark that carried the Mets to Game 7 of the World Series. But do you know the numbers that go with it?

On August 20, McGraw was the losing pitcher in an 8-3 16-inning loss to the Reds. That dropped to Mets to 55-67, the second-worst record in the NL, and left them seven games out of first place.

McGraw allowed 5 runs in 3 1/3 innings in that game – one run in the 13th and four more in the 16th. Part of the deal with McGraw that year was that when he got hit, he got hit a lot. He allowed 7 runs in relief once, six runs another time, the 5 in this game, 4 runs twice and three runs twice. That’s 30 runs alone in seven appearances … in relief.

These were his stats to that point in the season:

It’s important to remember for context that McGraw was a well-established pitcher who had been an important part of the 1969 champs. His 1972 and 1971 seasons rank 1-2 as the top seasons in Wins Above Replacement by a relief pitcher in Mets history. McGraw had earned his right to keep getting chances to turn it around.

On August 22, he did. McGraw pitched two scoreless innings in a 4-3 win over the Dodgers, who went 6 up, 6 down. The Mets scored 2 runs with 2 outs in the 9th to win the kind of game they had been losing throughout the season.

From that point on, McGraw was as good and as clutch as any relief pitcher the Mets have ever had.

For those who say relief ERAs don’t tell the whole story, let’s add in that McGraw inherited 12 baserunners in this hot stretch. None of them scored.

Every game in this run was an important one for the Mets in going from worst to first. The most impressive set might be McGraw’s stretch of 6 games in 8 days from September 12-19. Yogi Berra couldn’t afford to be shy about riding the hot hand. McGraw won 2 games and saved 4, allowing no runs, 7 hits and 2 walks in 11 2/3 innings pitched. His was a true rubber arm.

McGraw struck out five in two innings in a save against the Phillies to start this stretch. The headline on the AP story in the Chambersburg (PA) Public Opinion read “Tug McGraw’s Slump is Over.”

The article noted that McGraw couldn’t identify a cause for improvement. Nowadays with pitch performance numbers, we could note if his fastball had more zip or his screwball got more weak contact, but it’s all a guessing game.

“One day I just came out of the bullpen and did a great job,” McGraw said. “Everything was uphill from there. It came back as mysteriously as it had gone.”

McGraw didn’t pitch in the famous “Ball on the Wall” game on September 20 because he was needed so often in the games before it (the unsung hero of “Ball on the Wall” was Ray Sadecki, who pitched four scoreless innings in a McGrawian effort).

But after a three-inning save against the first-place Pirates the day before “Ball on the Wall,” McGraw reflected on the Jekyl & Hyde contrast of his 1973 season.

“I wouldn’t wish that on anybody,” he said in a quote in the next day’s Daily News. “Unless it meant the pennant.”

Ya gotta believe it did! 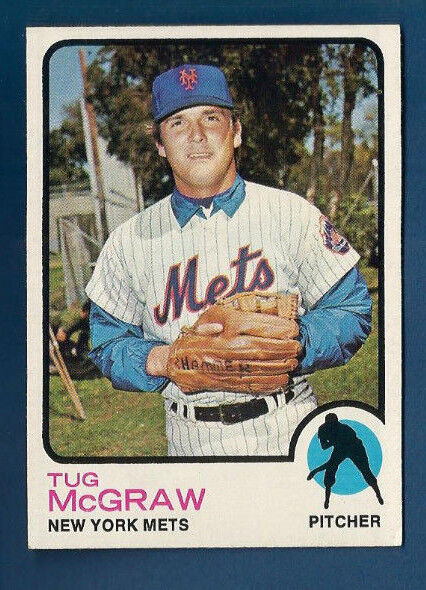