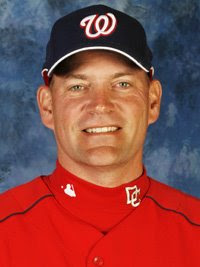 
Getting back to the subject of Mets frustration (and Friday seems like a good day to do so, given Thursday's events), you may have heard on Sunday that Phillies starter Adam Eaton is one of baseball's all-time best pitchers against the Mets, with a 5-0 mark.

In fact, there's only one retired pitcher with a better perfect record against the Mets. That would be former Pirate Randy Tomlin, who currently works as a pitching coach for the Potomac Nationals, a Class-A affiliate of the Washington Nationals.

For those who don't recall, this, in a nutshell, is Randy Tomlin's career, which spanned from 1990-1994. That coincides with a time in which the Pirates were on the rise, and the Mets were on a steep decline.

Tomlin vs Everyone Else

Randy Tomlin's nickname was "Whispers" and we thought it could be because the Mets couldn't get within earshot of a victory against him. He admitted, during a brief conversation on Thursday, that it was because he doesn't talk much.

"I did my talking on the field," said Tomlin, who noted later in the chat that he was also nicknamed "The Mets Killer" and "The Tomlinator."

Tomlin pitched at a time in which the Mets were very susceptible to lefthanded pitching (kind of like they are now, sans Moises Alou). Howard Johnson hit .148 against him. Darryl Strawberry was 2-for-9 with four strikeouts. His replacement, Vince Coleman, was 1-for-20 against Tomlin while with the Mets. His success began with a win in a September 6, 1990 game best remembered by Mets fans for management's choice to start rookie Julio Valera over Ron Darling. Tomlin dominated that day (Valera didn't) and was on his way to great success.

"I was a guy that changed speeds, who maybe could hit 91-92 miles-per-hour in a game, but my average fastball was 87-88," Tomlin said. "I never tried to throw hard all the time. I knew if I tried to blow the ball by guys, that I would get hit. So I tried to get a lot of groundballs"

Now, he tries to teach his methodology to pitchers who may someday face the Mets, as he did. Tomlin worked as a pitching coach at Liberty University, his alma mater, for 10 years, before joining the Nationals organization in 2007.

"I try to teach them how to pitch," Tomlin said, "to know their bodies, know their mechanics, know the types of pitchers they are, to know the adjustments that hitters make. I try to make sure they understand what it takes to be successful at this level."

Potomac is currently 13-5 in the Carolina League, so maybe some of Tomlin's Mets success is rubbing off on his staff. Every so often, he'll get reminded of his status as a source of frustration.

"People sometimes would come up to me and say 'Boy, I liked you as a pitcher," Tomlin said. "'But I hated when you pitched against the Mets."

True Metlins know...That the Mets got within a 'whisper' of a walk-off win in a game Tomlin started on August 12, 1992. The Mets lost, 7-6 at home in 10 innings, with Eddie Murray flying out with the bases loaded to end the game.