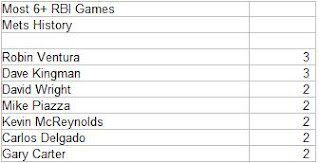 June 13, 2005
Alright, so it's 2 days later and the challenge for me now, after reading through about a dozen game stories and listening to talk radio, is to provide a fresh perspective on walk-off #324. If you're going to be a serious reader of this blog, you know what happened already, so let's look at what made this particular walk-off stand out. It would seem that the place to start is with the idea that everything broke just right on both sides of the ball. Particularly, I'm talking about Carlos Beltran's catch in the 7th inning, where he went over the center field fence to rob Jose Molina of a home run. Every no-hitter seems to have one defensive gem that makes it possible and perhaps that's true of great walk-off moments as well (We'll be looking into that!) Marlon Anderson's home run required a remarkable combination of events. It was only the sixth inside-the-park home run at Shea Stadium by a Met and the first since Darryl Strawberry in 1989. It required t
1 comment
Read more

June 16, 2020
I was looking over dominant pitching versus opponents and over various stretches in Mets history and came upon one I found interesting. In his first six starts in 1971, Nolan Ryan went 5-1 with an 0.77 ERA. In 46 2/3 innings, he allowed 19 hits and struck out 47. Opponents hit .121 and slugged .172 against him. And oh yes, he walked 37 batters (!), or more than 7 per 9 innings. As you go back through those six starts, you can see both the brilliance and the frustration that eventually led to Ryan’s departure in one of the worst trades in baseball history. April 29 at Cardinals – 6 IP, 0 R, 2 H, 5 K, 8 BB Ryan’s first start of the season was 7-0 win over the Cardinals that completed a four-game sweep, though it wasn’t the most artful of efforts. Ryan walked eight, but held the Cardinals to only two hits. That included the thwarting of Joe Torre’s season-opening 22-game hitting streak. Torre would go on to win the MVP. The big moment in the game came with the score 1-0 in the
2 comments
Read more

June 07, 2020
No. 5 – Todd Pratt (1999 NLDS Game 4 vs Diamondbacks) Matt Mantei got it right. Watch the Diamondbacks pitcher as soon as Todd Pratt hits the ball in the 10 th inning. Significant chagrin is probably the best way to describe it. The funny thing is that Todd Pratt didn’t know. The fans didn’t know. Steve Finley had a reputation for being a great defensive center fielder who could pull back would-be home runs. He looked like he had a pretty good chance at this one, but for a leap that wasn’t quite Finley-caliber. Much like Finley, I missed Pratt’s home run. I was at a football game in Schenectady N.Y. between my alma mater, The College of New Jersey and Union College. I was TCNJ’s broadcaster then and I errantly didn’t pack a Walkman to keep tabs. I found out what happened when I went to the Sports Information Director’s office and I popped up ESPN.com on my Netscape Navigator browser. My screams of delight were met with the SID running back into the office to ask what was goi
Post a Comment
Read more