The Best Day in a Mets Defeat

I went looking for the best game by a hitter in a Mets loss and came across this one from the otherwise completely unmemorable 1978 season.

It was a May 24 game between the Mets and Pirates attended by just over 5,300 fans, likely rendering it forgettable to many. But for Willie Montañez, it was about as good a day as he could have at the plate.

For those unfamiliar with Montañez, he was a player with some personality to his game. It didn't play well with some people at the time. As was described in his SABR Bioproject:

When Willie Montanez walked to the plate from the on-deck circle he would flip his bat end over end like a baton. When he swung and missed he had a high, circular finish reminiscent of a matador twirling his sword at a charging bull. At first base, he would sometimes tap runners on the rear end with his glove which on occasion led to more than one altercation. He was called a hot dog or showboat or worse, all of which Montanez disputed. “I’m just being me,” he said, “I’m just doing my thing.

Montanez had been obtained with outfielder Tom Grieve in a kooky four-way trade in the offseason in which the Mets gave up 1973 standouts John Milner and Jon Matlack. Odd discovery: The Daily News reported that the Mets had multiple deals lined up with the Royals to get John Mayberry and more for Jerry Koosman, but those fell through. The Mets had reportedly turned down the chance to get Montanez before making this deal.

But let’s stick to his best day with the Mets.

Pat Zachry limited the Pirates to one run through the first five innings, but gave up the tying double to Dave Parker and the go-ahead hit by Rennie Stennett in the sixth inning.

The Mets trailed 3-2 but this was where things got really good for Montañez. After making outs in his previous two plate appearances, he came up with one on and out in the eighth inning and socked a go-ahead two-run home run. Alas, the lead would not stand. Dave Parker tied the game 4-4 with a two-out RBI double in the bottom of the inning.

Undaunted, Montañez came up in the 10th inning against Kent Tekulve and amazingly he homered again, putting the Mets up 5-4.

The story of this game should have been that – Montañez hitting a go-ahead home run in the eighth inning and then another one in the 10th inning.

It should have been about part of a hot streak in which Montañez had 15 hits and 17 RBI in eight games.

Instead, this was a 1978 entry into the #LOLMets files. Jim Fregosi (yes, him) led off the bottom of the 10th with an infield single, which was followed by a walk to Frank Taveras, a sacrifice by Omar Moreno and an intentional walk to Parker that loaded the bases with one out.

Stennett than blooped a single to right field. Taveras appeared not to have gotten a great read on the ball and seemed ready to hold at third base. But when rightfielder Bruce Boisclair lobbed a throw to second base, Taveras raced home with the winning run.

One of the writers for the Pittsburgh Post-Gazette­ described it as one of the strangest endings ever seen. That was likely prompted by the the Pirates third base coach saying of Boisclair “I don’t know what he was thinking.”

To his credit, Boisclair owned it. “I screwed up,” Boisclair told reporters after the game.

He did. He cost the Mets a game and Montañez some recognition for an amazin’ accomplishment. 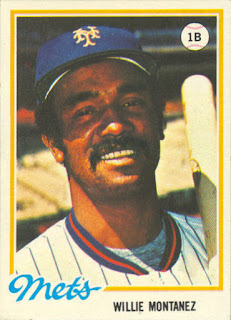