I was looking over dominant pitching versus opponents and over various stretches in Mets history and came upon one I found interesting.

As you go back through those six starts, you can see both the brilliance and the frustration that eventually led to Ryan’s departure in one of the worst trades in baseball history.

Ryan’s first start of the season was 7-0 win over the Cardinals that completed a four-game sweep, though it wasn’t the most artful of efforts. Ryan walked eight, but held the Cardinals to only two hits. That included the thwarting of Joe Torre’s season-opening 22-game hitting streak. Torre would go on to win the MVP.

The big moment in the game came with the score 1-0 in the sixth inning. Hodges stuck with Ryan and Cardinals manager Red Schoendienst let his pitcher, Jerry Reuss hit with the bases loaded and two outs. Ryan struck him out on his final pitch of the day.

“I’d have to rate his performance exceptional because he came back after loading the bases and got a strikeout when he needed it in the sixth,” said manager Gil Hodges.

Danny Frisella closed the last three innings in a manner far different from Ryan – he struck out six and walked none.

Also of note: Bud Harrelson had a rough day- he made two errors and his hitting streak was stopped at 10 games, after which he said “I didn’t expect to break Joe DiMaggio’s record.”

It was another one of those days for Ryan. He somehow allowed only one run despite walking seven in seven innings.

The Mets won one for him too, 2-1, in a bizarre seventh inning that featured a 14-minute debate over whether Don Hahn was hit by a pitch. The umpires finally ruled he was not and that was made academic by Hahn’s getting a base hit. Harrelson’s RBI hit that inning put the Mets ahead to stay.

Once again, it was Frisella to the rescue, escaping bases-loaded trouble in the eighth inning en route to the save.

Also of note: 2,000 people were arrested during an anti-war demonstration at the Justice Department garnered the day’s news headlines.

You can see the tension between Ryan and Hodges manifest here, despite Ryan improving to 4-0 on the season and the Mets winning for the 12th time in 14 games, 8-1 over the Astros. It was another Ryan performance that was alternatively breathless and agonizing to watch.

“I”ll never have the control of a Tom Seaver or a Jerry Koosman,” Ryan told reporters afterwards, pointing out what he called a lack of concentration. “But it’ll come. I’ll eventually get my walks per game down to three. I have a more mature attitude about the game. I believe I can win 20 games. In other years, I had personal problems. But this year I’ve decided to become one of the best pitchers in baseball. That’s my only goal now.”

Said Hodges afterwards: “Actually there’s not much I can do about it. It’s all up to Nolan Ryan. He has the arm. But that’s not enough. He has to get the ball in the strike zone.”

Also of note: This was the third straight game in which Ryan walked at least seven hitters. Bob Feller’s streak of 5 straight such games in 1938 is the longest known streak. The Mets’ “record” of four straight was done by Rick Ownbey in 1982. The Mets later traded Ownbey to the Cardinals with Neil Allen for Keith Hernandez.

A nationwide real strike was set to happen the day after this game. In it, the Ryan Express got derailed as the Mets lost, 4-2.

Ryan issued six walks (one intentional) but still allowed only two runs. His high point was holding Roberto Clemente to an 0-for-4 with two strikeouts.

Also of note: Clemente went 2-for-16 with no walks in his career against Ryan.

The Mets beat the Braves 6-2 to snap a 5-game losing streak as Ryan walked “only” five and minimized the damage, even with Hank Aaron hitting his 606th career home run.

“Nolan Ryan was the stopper for the Mets last night, but he also stopped a few hearts along the way,” wrote Phil Pepe of the Daily News. “Every game is an adventure when Ryan pitches and last night’s 6-2 victory at Shea was no exception.”

Ryan danced around trouble of his own making in the eighth after his error extended the inning and led to Clete Boyer’s RBI hit that cut the Mets lead to 6-2. That he wasn’t allowed to finish the game was due to wildness in the a ninth inning in which he hit two batters, threw a wild pitch and walked Aaron. Frisella got future Hall of Famer Orlando Cepeda to ground out on a comebacker to end the game.

Also of note: The AP focused its story on Ryan’s fastball.

Said Ryan: “I’ve never measured its velocity and frankly I don’t care how fast I am. I’m more concerned with my concentration on the mound.

In the annals of great pitching performances in Mets history, this one doesn’t get mentioned much. It came in the second-game of a twi-night West Coast doubleheader, so it ended too late for most of the now-accessible newspapers to provide a detailed account.

What we do know is that Ryan did finish this 2-1 win, helped by a great diving catch by Cleon Jones.

“If you see that catch in the World Series, you talk about it for years,” Padres manager Preston Gomez.

Also of note: What we did see in the papers the next day was the story of a potential trade. The Mets were interested in acquiring a young Dodgers catcher, Bill Sudakis, who had hit well in 1970 but done little in 1971.

Who did the Dodgers want for Sudakis? Dodgers GM Al Campanis had his eye on the hard-throwing Texan.

“First we were talking about Nolan Ryan for Sudakis,” Campanis told the Daily News. “Then he pitches a four-hitter and he wins four or five games and he’s suddenly unavailable.”

The Mets ended up claiming Sudakis off waivers the following spring training. He hit .143 in 18 games. The Mets were smart not to trade Ryan for him. But all that meant was that they traded Ryan somewhere else.

I bring up these starts, which look so good in combination, because the fatigue of throwing so many pitches (due to the high walk and strikeout totals) may have gotten to Ryan by year's end.

In his last five appearances that season, Ryan allowed 18 runs and walked 20 batters in 12 1/3 innings. In his last start against the Cardinals he walked four straight to start the game and was pulled after allowing a two-run single.

“It was the most distressing day of my life,” Ryan said. “I never was so embarrassed.”

Those last few starts seem to have been the last straw for the Mets. They just couldn’t deal with the Jekyl and Hyde nature of Ryan’s efforts. They found a taker in the Angels, whose GM Harry Dalton felt there was more good than bad to be found in Ryan’s work.

The day of the trade, Dalton said “We’ve obtained the best arm in the National League and one of the best in baseball. We know Ryan has had control problems, but at 24 he may be ready to come into his own.”

Said Ryan: “I feel like my career is ahead of me.” 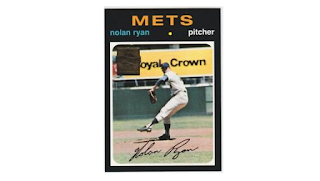 Kenny S. said…
Great article, Mark. I actually remember it well because that season my dad was granted the use of two seats in the press box down the left-field line away from the working press area from someone who worked for the teams and we went to several games in May and June, which were usually on Tuesday nights. The first two games were May 4 and 11, Ryan's high walk and strikeout games. Unfortunately, my Dad suffered a heart attack in early July (he made a full recovery and lived another 42 years) and he always joked that watching Ryan pitch led to his heart attack!
11:08 AM